The Berger Picard is a robust, rustic medium-sized dog, recognizable by its scribbled appearance. With good musculature and balanced bones, without giving off an impression of heaviness, it displays a sparkling look of intelligence and liveliness.

It is also characterized by great elegance. It has a little country dog ​​look, It fits in very well with city life, as long as It’s out regularly. It’s impulsive and athletic, sometimes even considered fanciful

As its name suggests, the Berger de Picardie has Picardy origins, but it would have benefited from the contributions of several sheepdogs from different origins in Europe. It descended from dogs  Celts who arrived in the north of France in the 4th  century BC. Traces of the Shepherd of Picardy or its ancestor go back to the Middle Ages.

A very old breed, it was exhibited for the first time in 1863. Somewhat abandoned, the breed will be relaunched after World War II. The dog lover Robert Montenot founded the Friends of Berger Picard club in the mid-1950s when a new breed standard was approved by the Société Centrale Canine in 1964. In the meantime, the FCI will have definitively recognized it in June 1955.

The Berger Picardie is a dog who knows how to reconcile wisdom and boldness. Intelligent, calm, and affectionate, It’s a pleasant companion for Its master and all Its family, especially children. Its great vigilance, Its bravery, and Its natural distrust of strangers make It a very good watchdog.

It enjoys the company of children, with whom It does not hesitate to play.

Its facial expressions often make people smile and it’ss very complicit with those close to  It. Due to Its balanced personality, It’s made to guide and guard flocks of sheep, but this is not Its only specialty: agility, ringing, and tracking are also part of Its favorite fields thanks to Its liveliness and this will that It has to please Its master.

The Berger de Picardie is not an aggressive dog, but it is even less fearful.

The Berger de Picardie must be brought up both firmly and gently. It’s the kind of dog who doesn’t just run to obey. It needs to understand the usefulness of Its work. And when this is the case, it puts all Its ardor and application into it.

Its education is facilitated by Its great kindness, Its good nature, and above all Its intelligence and sensitivity. Educating them also helps to limit their excess enthusiasm.

The Berger de Picardie appreciates family life, especially the company of children. A house with a fenced garden would suit It perfectly. Life in an apartment much less. It is a dog intended for a person able to educate it firmly and to be available several hours a day.

A great sportsman and adventurer at heart, It enjoys long physical walks with Its master. It should not be inactive for too long, otherwise, It will not be happy.

The Berger de Picardie is a particularly robust dog. It enjoys iron health and does not fear disease as long as Its properly cared for and fed well.

The life expectancy of a Berger de Picardie is, on average, between 12 years and 15 years.

It is recommended to brush the dog once a week to maintain the beauty and cleanliness of Its coat. It does not need to be washed unless it has become very dirty. 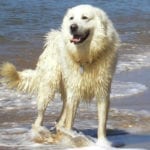