You are a puppy owner and you are wondering if it is useful to have your puppy sterilized. You ask yourself a lot of questions about the consequences of such an act. Rest assured, sterilization ensures better long-term health for your dog and spares many illnesses.

The sterilization must be through surgery and remains mandatory for dogs’ first class. Veterinarians recommend to neuter male dogs and sterilize all the dogs before puberty, that is to say between 6 and 10 months depending on the breed.

The health benefits of your dog

For females, the removal of the ovaries reduces the risk of uterine, breast, or ovarian cancer. In the event of an unscheduled mating, the female may not be ready to give birth to puppies that may be too big for Its body. Sterilization then makes it possible to limit the risks due to abortions.

Whether your dog is a male or a female, with sterilization you are sure to avoid unwanted litters. Removing the testicles in males also reduces your dog’s aggressive impulses since It will no longer develop testosterone.

During the operation, your companion will be put to sleep using anesthesia adapted to Its physical characteristics (weight, age, race, and medical history) the risk of complications is therefore very low. Equipment will also monitor Its heart rate to check throughout the operation that your companion is doing well.

The most common sterilization of females involves the removal of the ovaries (with or without the uterus). Other possibilities arise such as tubal ligation. However, this intervention does not remove the heat of the female, but It will not be able to have young ones. This practice does not prevent the ovaries from continuing to secrete hormones. It can become dangerous for Its health and lead to illnesses.

Castration consists of a single incision at the back of the penis through which the 2 testicles will be extracted. This opening naturally requires several stitches on several planes. There is also the vasectomy which consists of excising the vas deferens, which is the conductive duct of the spermatozoa from the testes to the prostate.

After the procedure, your dog will go home the same day or in the worst case, the next day.

Regarding post-operative care, your dog will need to stay at home for several days, in order to stay calm. Avoid biting the stitches and skipping as this may prevent scarring and cause infections.

For the rest, your veterinarian will give you personalized advice based on the observations made on your dog and will tell you when to remove the stitches (generally 10 to 15 days after the procedure).

A temporary solution without going through the surgery box is possible. This is chemical castration. By means of drugs and various molecules, you can temporarily sterilize your dog.

For example, It can be injected with progestagens. This hormone prevents the secretion of testosterone for variable effectiveness between 1 and 6 months depending on the case. Nevertheless, the side effects remain numerous, one can quote the polyphagia (feeling of exaggerated hunger), diabetes, or the risk of appearance of a mammary tumor in the male.

Finally, there is a contraceptive implant. This implant housed under your dog’s skin gradually and continuously releases hormones in your dog’s body. The dog will become temporarily sterile after 6 to 12 weeks depending on the dog for a variable period between 6 to 12 months in general. In some cases, the contraceptive implant may be effective for up to 18 months.

It’s a very interesting and effective solution if you want to plan a litter of puppies. In addition, it presents very few side effects apart from possible exaggerated arousal during the first 2 to 3 weeks.

Side effects of sterilization

Spaying your dog can have both positive and negative side effects. A brief overview: 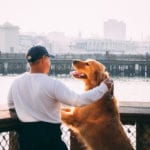