The Bedlington Terrier is the kind of animal you won’t forget. You will rarely have the opportunity to see a dog with such an original physique.

Its long head and short, wavy coat help distinguish it from other breeds. This dog is appreciated for its, its gentleness and its calm.

Its education requires firmness and certain experience. Its health should be closely monitored, especially as It’s predisposed to certain diseases.

The  Bedlington Terrier has not always been known by this name. Indeed, originally, it was more commonly known as the Rothbury Terrier, because of provenance from the mining regions of England.

It is therefore a very old British breed. Its ancestors are the Dandie Dinmont Terrier, the Otter Dog, and the Whippet.

It was used in hunting rabbits and foxes. In mines, it was used to ratify galleries.

It became popular outside Its native region in the late 19 th century.

You shouldn’t be fooled by Its sheepish looks. The Bedlington Terrier is a dog capable of defending itself if you come looking for lice.

Fortunately, Its primary temperament is not violence.

On the contrary, It’s a gentle dog  (like a lamb), fairly calm, but above all who knows how to be active,  cheerful, and playful. It’s an excellent  Terrier, enjoying hunting parties.

It’s courageous,  reckless, and excels in caring for his adoptive family.

The ideal companion for an owner, the Bedlington Terrier is also not a big barker, which makes it even more appreciable. On the other hand, it is not the ideal dog for young children.

It’s not that It’s dangerous, but It can’t tell the difference from a taller person.

Well educated, it can coexist with congeners and cats.

Although its education is not that difficult, the Bedlington Terrier is not to be put in the hands of a neophyte. Thus, if it is a first dog for a master, it must be entrusted to a canine professional.

Intelligent, curious, the Bedlington Terrier also has a rather stubborn and well-assorted character.

In addition, without firmness, it could do as it pleases and gains the upper hand over its owner.

It is therefore advisable to educate Its as it should from an early age, with the emphasis on Its socialization.

Be careful, any excess of bluntness would generate the opposite result from that expected. This dog loves to discover, learn new things, and, above all,  to please Its master.

If it has long been bred for hunting and has retained its instinct, Bedlington Terrier is today especially appreciated as a companion dog.

It adapts, in fact, to all life and family situations, as long as Its needs are met. Particular attention must be paid by families with rodents.

Although It likes to spend and run outside, Its need for activity is not as huge. In fact,  living in an apartment suits It like a glove,  It benefits from one to 2  big daily outings for Its development and Its well-being.

Otherwise, It can develop Its destructive side.

The Bedlington Terrier is a hardy dog. However, It’s prone to develop several diseases that follow from generation to generation.

Thus, It’s predisposed to hepatitis by copper overload which affects a fragile liver. Its eyes may have a tendency to run, which is called tear point atresia.

Its kidneys may be suffering from a developmental deficit in their cortex. Finally, eye conditions can occur, such as retinal dysplasia.  It’s also not immune to hip and patella dysplasia.

This dog can live to be 14 years old, but might not be spared from health concerns.

Although endowed with a thick and generous coat, it loses little hair.

Apart from regular brushing, as well as extensive grooming, the Bedlington Terrier does not require very difficult maintenance.

However, it will be necessary to monitor Its  eyes  because of Its predisposition to eye diseases and monitor Its ears from time to time

The Bedlington Terrier needs to be groomed, ideally by a professional. It forelock and the rest of Its dress needs to be trimmed regularly to ensure its typical charm. 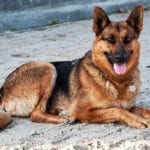 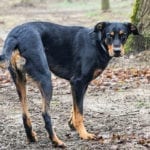