The Bichon Frise is a small companion dog full of cheerfulness, liveliness, recognizable by its long, spiral, and supple coat. Its head carriage is high and denotes a certain pride in Its attitude. This dog tends to have a high price tag.

The breed of the Bichon Frise is quite old. Appeared around the 14th century , it is said to be the fruit of crossing the Barbet (also at the origin of the Poodle ) and the Bichon Maltais. Long called Bichon de Ténériffe, it arrived in France during the 16th century and quickly met with considerable success, particularly with kings François I and Henri III and their courts.

Its popularity then declined somewhat in France. Thanks to a Belgian breeder, the breed was able to be saved after World War II, which could have made it disappear. It was definitively recognized by the Fédération Cynologique Internationale (FCI) on October 28, 1959.

The Bichon Frise is a lively, cheerful, and playful dog while being very calm. Attached to Its master and Its family, It always seeks their proximity. It gets along very well with children. Obviously, the Bichon Frize is not made for guarding. He is exclusively a companion dog and fulfills this role perfectly.

The Bichon Frise is not a  particularly difficult dog to train. Of a gentle and docile nature, it easily acquires the learning inculcated in it by its master, who must however be careful not to let it develop a dominant character. Its education must be done with firmness and gentleness.

It’s made for the indoor life, close to its master and its family. It does not support loneliness. The apartment life suits It perfectly, but being able to have an enclosed garden suits It just as much. It adapts to all family situations, with or without children.

The curly-haired Bichon breed has a predisposition to certain diseases, including the following:  Legg-Perthes-Calvé disease (aseptic necrosis of the femoral head), cataracts, corneal dystrophy, and patella dislocation.

The life expectancy of a Bichon Frize is, on average, between 12 years and 15 years.

The Bichon Frise barely sheds hair. It is part of the so-called hypoallergenic dog breeds. However, Its dress requires a fairly important and frequent maintenance because Its hair can easily form knots and must keep its impeccable white color.

It’s recommended to brush the dog frequently, and wash It several times a year, and to have It groomed regularly. Particular attention should be paid to the eye area, which gets dirty easily and the ears or hair can grow in its ear canal. It should also be brushed as It’s very sensitive to tartar. 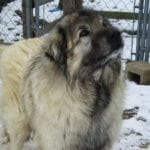