The Chihuahua is the smallest dog breed in the world and is very popular today. Very appreciated for its small size and its qualities as a companion dog, the Chihuahua remains a dog that can be temperamental, even aggressive, especially if it is not educated and socialized.

Adopting a Chihuahua should be a pleasure and a joy, but we must not forget to consider It as a dog! So, learning to set limits, educating It, socializing It, and not overprotecting It will be your main missions, if you want to adopt a Chihuahua.

The Chihuahua is a very old dog breed. It is considered the smallest in the world. Its name simply comes from the largest state in the Republic of Mexico: the state of Chihuahua .

It would have lived there in total freedom before being domesticated by the natives at the time of the Toltecs. At the end of the 19th century, this dog was exported in masse to the United States and Europe followed.

“Small dog but a big character!” This is probably due to the fact that its small size gives it a number of privileges that a dog with a larger build would not have. Indeed, most Chihuahua owners tend to overprotect their dog, but this can result in an increase in the character of this dog, thus feeling “all-powerful”.

You must, indeed, be more vigilant with a Chihuahua but it must be done intelligently. Educating It, socializing It with other dogs, setting limits is also very important because this will allow It to have a reassuring environment. Indeed, a Chihuahua or a dog in general who has no limits, will not necessarily be happy and may become anxious and stressed.

The chihuahua has the reputation of being a rather “talkative” dog. In addition, its bark is sharp and quite powerful compared to its small size. Fortunately, it is possible to limit this barking with proper education and ensuring that your puppy’s needs are met.

The Chihuahua can live with children, however, this small dog can be temperamental, and often the owners do not appreciate the importance of educating and socializing it from an early age. Yet a Chihuahua bite on a child’s face can be dramatic. This is why you will have to be rigorous and get your dog used to the presence of children. It will also be necessary to respect certain safety rules and teach children the behaviors to adopt when living with a dog, such as not carrying or not waking it up, not harming it, etc.

As with all dog breeds, if you want to have several species coexist, they will have to be accustomed early and positively. Also, be careful, the Chihuahua due to its small size could more easily be injured in the presence of animals of larger sizes.

The Chihuahua does not present any difficulty in Its education even if it’s preferable like any small dog with a strong character to do it from an early age. It’s about being firm and it will be, faithful and discreet.

Very stubborn, It could then be uncontrollable and do as It pleases. We must not spare this canine which will then respond perfectly to orders. It’s suggested that It socialize very quickly so that It can be pleasant with strangers and other animals.

The Chihuahua is a companion dog, so its need for exercise will obviously be less than that of a Malinois , for example. However, It will need daily expenditure to feel good. Thus, a daily walk of 30 minutes, outside the garden, will be the minimum to grant It Its balance and Its well-being.

It’s also a dog who does not support loneliness. If It feels lonely, bored, or not exercised enough, It will show Its frustration by chewing everything It can or barking excessively.

The Chihuahua, due to its small size and its role as a companion dog, will not be the right candidate for sports activities. Of course, It will be able and enjoy participating in family life, but offering It intense physical or sports activities will not necessarily be possible.

This little dog can adapt perfectly to living in an apartment. However, you will have to remember to take it out regularly, even if you have a garden.

Chihuahuas are Mexican dogs who love the sun and the heat that they endure quite well! Close to the ground and little “naturally equipped” against the cold, Chihuahuas fear low temperatures. During winter, the coat is therefore mandatory if you live in a region where the cold season is quite chill.

With a fragile appearance, the Chihuahua is however robust and enjoys a good life expectancy. It’s not at all fragile and can live for more than 20 years. It’s prone to eye irritation if Its eyes are not maintained regularly.

The calving are sometimes difficult because of its very small size. There are also some congenital heart diseases (pulmonary stenosis or mitral endocardiosis) and neurological (hydrocephalus).  It can sometimes be chilly and should therefore be kept away from drafts and outdoors in winter.

Here are the few problems that can be present in this breed of dog:

Like many puppies with a small build, their rapid metabolism and low-fat stores can make them prone to hypoglycemia. Like us humans, this corresponds to a drop in blood sugar (sugar levels) and can lead to stunted growth if left untreated.

Dislocation of the patella

About 30% of Chihuahuas can be affected by this problem, which results in lameness and can be inherited or caused by physical trauma.

The Chihuahua can also be susceptible to various forms of demodicosis and other skin problems. Often, increased vigilance and a quality diet will limit these health problems.

The life expectancy of a Chihuahua is, on average, between 14 years and 18 years

The Chihuahua is a naturally clean little dog that requires little maintenance. The long-haired Chihuahua will require more maintenance to avoid knots. Inspect Its eyes and ears regularly.

Whether long or short-haired, Its coat is odorless. It should be brushed regularly. It should be washed from time to time with warm water and a mild shampoo.

The Chihuahua’s diet must be based on high-quality kibble. It should not be too stuffy to not alter its digestive system and cause some health concerns. 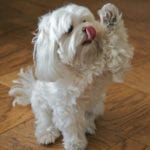