The Shetland Sheepdog is a small, long-haired working dog. Elegant, supple, and graceful in appearance, It looks a lot like a young Collie, but they are from different breeds. Without heaviness or disproportions, it is harmoniously constructed and displays an expression that is both gentle and intelligent.

The breed owes its name to the Shetland Islands, the Scottish islands from which it originates. The Shetland Sheepdog is most likely the result of crosses between local sheepdogs and the Collie, hence its great resemblance to the Shetland. It’s also often mistaken for a young Collie or a “mini-Collie”.

The Shetland Sheepdog is nevertheless a breed On its own. It was highly regarded by sheep farmers for Its great intelligence and Its ability to provide quality work with the herds, even under the most difficult conditions.

Today, it continues to delight a few shepherds, but it is mainly used as a companion dog. It’s also particularly good at agility events. Its official standard currently in force was published in 2013.

The Shetland Sheepdog is a dog of remarkable gentleness and intelligence. Awake and active, It’s, at the base, a very good sheepdog. Attentive and attached to Its master, It’s rather wary of strangers and is never fearful.

It gets along very well with children thanks to Its kindness and Its playful side.

While attentive and intelligent, the Shetland Sheepdog is nonetheless a rather stubborn dog at times. It must therefore be educated with a certain firmness. Be careful, however, not to rush it too much, because it’s quite sensitive. Excessively scolded, It can become depressed.

While bred for outdoor work, the Shetland Sheepdog has adapted perfectly to city life, especially indoors and in apartments. As long as It enjoys Its long daily walks and enjoys regular exercise from Its master, any lifestyle can suit It.

The Shetland Sheepdog is characterized by its hardiness and robustness. It does not have a genetic predisposition to a particular disease, but that does not prevent It from remaining vigilant about Its growth and Its health. It enjoys a good life expectancy: around 14 years.

The Shetland Sheepdog remains subject to an abundant moult , occurring once or twice a year : once in the male and twice in the female, mainly after heat. Its beautiful dress requires regular maintenance to preserve its appearance and health.

It is recommended to brush and comb the dog at least once a week by performing a deep brushing for a good ten minutes. During the moult, daily brushing is essential and a bath (with an adapted shampoo) makes it possible to facilitate the removal of dead hair while maintaining the beauty of the dress. 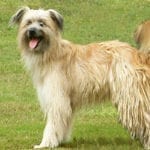