Barking is, without a doubt, the most characteristic sound of our dogs. They bark to get our attention, to warn us of potential danger, and even to invite us to a game session.

Therefore, it is an excellent communication tool. But dogs are not born knowing how to bark, rather it is a skill that will manifest itself as part of the puppy’s development.

Contents hide
1 The importance of barking
2 The age of barking
3 My puppy won’t stop barking
4 Why won’t my adopted adult dog bark?
5 Dogs that do not bark

The importance of barking

Barking is an important form of communication for the dog. So the first thing to keep in mind is that a dog is not going to bark to bother us. In its own way, it is wanting to tell us something and our job is to find out what it is about. This task is not always easy, as barking can have multiple meanings depending on the context.

Although there are still people who think that barking is always a sign of threat or aggressiveness, it is a big mistake. A dog can bark with different intensity, tone, and volume to express joy, nervousness, alertness, fright, desire to play, etc. In addition, it serves to communicate both with us and with other dogs.

Therefore, it makes no sense to scold a dog because it barks. Even in cases where the barking may be excessive, it will be indicating the existence of a problem that we will also have to solve. An activity as important as barking is logical that its appearance dates back to the puppy stage.

The age of barking

Puppies are born very vulnerable and completely dependent on their mother. It takes care of them, feeds them, and keeps them warm since in the first weeks they are not able to regulate their body temperature. During the first 15-20 days of life, puppies will do little more than eat and sleep, like babies that they are.

From the moment they begin to move, towards that age, they also begin to interact with the environment and emit certain sounds that will already remind us of bark, although much softer and sharper. But it will not be until a few weeks later, about a month and a half, that we can talk about the first barks themselves.

However, there will be earlier puppies, while others will take longer to decide. Both situations are normal. Development is not an exact science. Like adult dogs, they can bark for different reasons that we can interpret depending on the context.

People who adopt a puppy tend to quickly see how soon they begin to bark. It is not surprising that especially in the first days of adaptation to the new home, the puppy barks and cries. Sometimes we are the ones who unintentionally promote this barking because we caress it, reinforcing the behavior.

You shouldn’t scold It, as it could be counterproductive. The idea is to reward it, with edible rewards, caresses, or effusive words of congratulations.

Careful, because not reinforcing the barking behavior does not mean that we have to ignore the barking puppy. It is important to always look for the cause and try to solve it, since it could demand our attention for many different reasons, such as hunger or some other basic need.

Although newly adopted puppies tend to be vocally expressive, when we adopt an adult dog it is common to find ourselves in the opposite case. By age, it can bark, but it needs a period of adaptation to be encouraged to do so. Especially if It has had bad experiences or suffered abuse during its previous life.

You simply have to respect it, meet its needs and wait for its to gain confidence. They can take months and even, in the most serious cases, years. Of course, if in addition to not barking it manifests excessive fear, phobias, anxiety, etc., you must go to an ethologist or expert in canine behavior.

Dogs that do not bark

First of all, before the first month and a half, the dog does not have to bark. From that date on, having the ability to do so does not mean that the dog will bark or do it when we feel like it. Barking more or less will not only depend on the circumstances, but also on the temperament of each specimen or even its breed.

For example, a dog that lives with others is more normal to bark, even if only because of the interaction between peers. On the other hand, one who lives alone and quiet in an apartment, with its needs covered, will not have so many reasons to bark. On the other hand, there are breeds more prone to barking, while others are almost completely silent.

A different situation is that our dog does not bark as usual. A strange tone in the bark can indicate a health problem, such as laryngitis. It would be an example in which you would have to go to the vet to diagnose and treat. 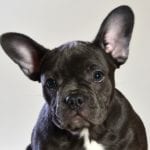