Unlike a cat, a dog cannot groom itself on its own. It’s going to need you to clean it up. Know that whatever the breed of your dog, it must be well maintained. The grooming of dogs with long hair remains longer and more important than for dogs with short hair. However, care for eyes, ears, teeth, or nails is the same for everyone.

Your dog’s hygiene has consequences on Its behavior

No matter the season, brush your pet regularly. In winter, masters sometimes neglect their dog’s hygiene, an attitude that should not be adopted, as it could have harmful consequences for your companion. For example, if you don’t remember to look at Its fingernails, they can turn and hurt Its pad causing It to limp. This could deter It from playing or it can make become aggressive because of the pain.

When dogs live in groups, they respect a strong hierarchy. The leader of the pack can thus ask Its subordinates to wash Its eyes, ears, or coat as It pleases.

Grooming is of great importance in the handler-dog relationship, and in subsequent relationships with the groomer. Indeed, if the owners do not impose any physical maintenance on their animal, or are prevented by it, they are failing in their role.

However, if you get your dog used to grooming as soon as It’s a puppy, It will become a much more docile and obedient companion than the other way around. By putting up with manipulations like immobilization, bathing, drying, etc., the dog shows that It accepts your authority in a concrete way and that It trusts the one who grooms It. 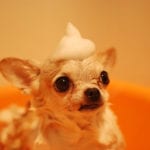