Many people grew up watching Garfield on the small screen. On June 19, 1978, the first comic strip about this character was published. Have you ever wondered what breed inspired Jim Davies to create one of the most famous cats in the world? Here we give you the answer.

Summary of the Garfield series

The laziest cat in the history of comics was born in 1978 in the American daily and Sunday press. Garfield, adored by his master, can relish the pleasure of doing nothing. Fat, always tired, always hungry, always talkative, he philosophizes with humor about his feline condition. By not forgetting to eat and rest, of course.

Born in the kitchen of the Italian restaurant Mamma Leoni, Garfield weighs just over two kilos and, from the beginning, showed a passion for Italian food.

The restaurant owner, forced to choose between Garfield or closing the doors of his dining room for lack of pasta, sells it to a pet store. So Garfield thought he was lost until Jon Arbuckle, or Jon Good-natured walked through the door.

Garfield is such a gourmet, with a marked preference for lasagna, it may be because he was born in the kitchen of an Italian restaurant.  he hates fruits and vegetables and other low-fat meals, he nevertheless appreciates herbs, in particular his master’s ferns and green plants, or those he finds in the neighbor’s garden.

If eating is one of Its favorite things to do, sleeping and lounging are other hobbies of his. Do not rely on him to chase mice or make excessive leaps. Besides, as far as mice are concerned, he prefers to get along with them: he pretends to chase them from time to time, to please his master Jon, and they can stay by being discreet … Garfield is one lazy cat.

So What Kind Of Cat Is Garfield

Garfield is inspired by an exotic cat. This feline emerged from crossing the English shorthair, the American shorthair cat, and the Persian cat in 1966 thanks to Jane Martinke, a breeder. Hybridizations were also carried out with the Russian blue and the Burmese cat.

It’s a very affectionate cat who alternates between calm moments and more active moments because he loves to play. Its intelligence, Its gentleness, Its affection make the Exotic Shorthair the ideal pet.

Description and characteristics of the Exotic Shorthair

The Exotic Shorthair is identical to the Persian without its long hairs. It has the same dense and very soft coat. Its body is sturdy, muscular, with a broad chest and shoulders. The Exotic Shorthair’s head is very round and massive with a large forehead, large spaced orange or copper-colored eyes, and a characteristic squashed nose. Its short legs end in round, stocky feet.

Origin of the Exotic Shorthair

The Exotic Shorthair appeared recently, at the end of the 1960s, in the United States where it is very popular. It is the result of crosses between Persians and Birman, American Shorthairs and British Shorthairs to obtain a cat with the characteristics of the Persian, including its woolly and soft fur but with short hair.

Character and behavior of the Exotic Shorthair – Who is it for?

The Exotic Shorthair is a very sweet, intelligent, and curious cat. It’s a little more active than the Persian but, like the latter, the Exotic Shorthair likes comfort and tranquility. It’s also playful and adores the presence of children with whom It shows great patience, but It also adapts well to a calm master.

The Exotic Shorthair is very affectionate. It’s a cat who adapts well to living in an apartment, who does not meow much

Price of an Exotic Shorthair kitten

The price of an Exotic Shorthair kitten will depend on the sex, the pedigree of the parents, the conformity to breed standards, etc. 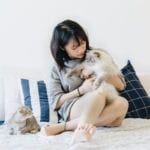