It is not uncommon for you to choose a name for your dog because of a character trait that is unique to it, its color, or the impression it gives off. This choice can be made according to various criteria and the possibilities are endless. Faced with this embarrassment of choice, here are some suggestions for giving a name to your pooch if it is male.

Choosing a name for your dog is sometimes a puzzle, especially if you want to opt for something that is a little out of the ordinary. If the original choices may appeal, some classics remain just as effective and attractive. We advise most often to choose names with one or two syllables to facilitate the learning of the basic orders.

The simpler the expression and the clearer the sounds, the faster the dog will become familiar with it and respond to it. It will guide Its behavior, Its prohibitions, and summarize your authority.

What are the best names for a male dog ? These few indications will help you make your choice.

It seems difficult to imagine a Chihuahua associated with the name “Touffu”. After all why not? However, remember to choose the first name of your dog according to its breed and therefore its size. For dogs with long hair, don’t skimp on the masculine aspect of the name. Because at first glance, Its gender will not be obvious to everyone.

A dog must understand very clearly that we are addressing It. It doesn’t necessarily like long terms. So opt for a fairly short, concise first name of about 2 syllables, also quite flashy. Alternate between weak vowels and strong consonants. For example, do not hesitate to choose a first name comprising the letters “k”, “r” or even “t”.

It remains that from its race, you can also opt for a softer sounding first name. It will also be possible to play with contrasts and thus make a name more fun. Just remember that your dog will have to take it on, and so will you, until the end of Its days. So make your life easier so that learning and your life together take place in the best possible way. 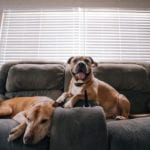